An amazing timing, since we are a few days from the start of the great period of sales that nowadays affects the whole world and is no longer limited to the United States, but no major news: started (around) 4 p.m on November 17 the Google November 2021 Core Update, the latest basic update of search engine algorithms, that will complete its action within the next few weeks by bringing the usual disruptions to SERPs in order to improve the accuracy and quality of the responses provided to users.

Google November 2021 Core Update, the information we have

To announce the release of the update was the Google Search Central Twitter account, with the usual double mode: first a tweet to prepare psychologically users, and then another tweet to confirm the rollout (which will be followed by the last one, who will advise of the conclusion of the intervention). 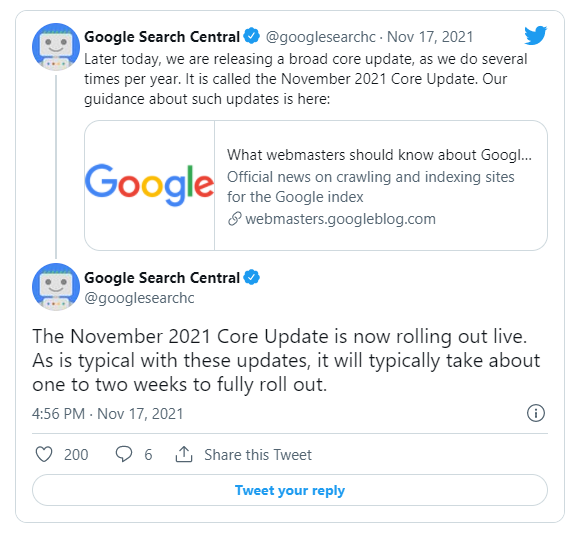 It does not even change the content of the information provided: the November 2021 Core Update is starting; it simultaneously affects all versions of Google around the world; it will take about two weeks to complete the roll out; site owners, webmasters and SEOs have no particular changes to make if they notice traffic crashes, because the only advice is to follow the classic directions to respond to Google updates and build sites and efficient content.

The only aspect different from previous occasions concerns the profile that provided the indications: it was, in fact, the official Google Search Central account (which, letâ€™s remember, is the new general name that Big G also gave almost exactly a year ago to the blog and Youtube channel in order to replace Google Webmaster) and not, as happened so far, the @searchliaison Danny Sullivan. A simple curiosity without any particular reason other than, as John Mueller later clarified, the feeling that this information “seemed more suitable to be communicated through this account”.

Google reassures: there is nothing to fear

As said, many analysts were surprised at the timing chosen for the release of this update, which falls just a week before Thanksgiving and will be fully implemented during the online shopping time of Black Friday and Cyber Monday.

Danny Sullivan responded to them (and to all those interested, or rather frightened) and in a series of tweets he tried to explain the reason behind this choice and to reassure about the potential negative effects.

First, Sullivan denied that Google does not release updates in vacation periods or immediately prior, or rather said that this was a “practice of years and years ago” no longer in use. Anyway, the search liaison explained that after verifying that the December 2020 Core Update started in the middle of the shopping season did not largely seem to be a huge problem, the Google team thought that, similarly, an early update before this period would not have been, either.

And this is because, Sullivan points out, in reality the Broad Core Update “do not make any huge difference for most sites”, and in fact in most cases you will not see any particular changes in ranking or traffic.

Therefore, people “should not panic” because “the purpose of every update is not to cause concerns” nor is it a negative event for everyone: And if, on the one hand, Google invites the community to avoid catastrophic tones in announcing or commenting on these news, on the other it signals that it will give more consideration to feedback also in relation to the weather, if it serves to alleviate fears.

Each time Google updates its search ranking algorithms, a site may have changes in result rankings, with ups or downs: to have at least a time indication on when Google makes these updates gives us the opportunity to fix a point in the traffic analysis, so as to check whether the changes depend on our interventions or, indeed, on this external factor, which involves an overall reconsideration of the research intent and therefore of the results shown in SERP.

As said, Google has repeatedly provided advice on what to consider if you have been negatively affected by a major update, but in practice there are no specific immediate actions to take to recover and, in fact, a negative impact on the ranking might not indicate that something is wrong in our pages. Usually, affected sites may see some improvement after adjusting to the required quality level, but typically you have to wait for a subsequent core update to more decisive recoveries. As Sullivan summarizes, however, the indications are always the same and if you comply with “the old best practices” a site should be fine.

The November 2021 Core Update arrives after over 4 months from the previous intervention – the Google July 2021 Core Update, which was then the second and final part of the June 2021 Core Update; going back in time we can find to the aforementioned December 2020 Core Update, started on December 3, and then the May 2020 Core Update. As in previous cases, also this time the algorithmic update came a short distance from the release of the new version of the guidelines for quality raters, dated October 19: probably there is no causal correlation, but it is still interesting to note that this situation has been repeated already in other circumstances (for example, we also talked about the January 2020 Core Update), almost as if Google periodically closed a peculiar phase of work on the SERPs, which leads on one hand to the correction of documentation for human (and external) evaluations, and on the other to the application of improvements in SERP.