Our regular SEOZoom case study series now features Marco Aurelio Cutrufo, a certified specialist in digital reputation for individuals and businesses – who we have already met in an in-depth article on brand reputation, a subject in which he is an expert – who wanted to share with the entire community a case study on the success of his company Workengo.it in serving the client dbnmedicalgroup.com, the website of a Medical Centre specialising in aesthetic medicine and nutrition in Rome.

The situation before the intervention

The description prior to the consultation allows us to understand the state of the centre’s website which, as Cutrufo explains, had:

In more analytical terms, the doctor’s office was non-existent from a competitive point of view in the market and in particular had no organic visibility; in particular, the site did not provide in-depth content in the subject that could attract the interest of a selected target, and from a technical point of view was also outdated and not fully functional. All this contributed to creating a very low perception of the brand, which did not correspond to the real quality and prestige of the professionals of the Roman medical practice.

The results 8 months after the start of work

In just five months – and with maximum effectiveness eight months after the work began – the results have already become visible, with noticeable improvements in several areas. In particular, Cutrufo tells us, in this period:

Analysing the effects of the consultancy in a broader way, the website managed to be positioned both for short keywords (e.g. mole removals) and for long tail keywords (e.g. laser hair removal centres in Rome) in the sector and niche, exceeding 90% of direct and organic competitors at national level and obtaining 43% of the keywords positioned on the first page of Google.

In addition, for some specific keywords linked to top treatments, the medical practice also appears in position 1 on Youtube, as in the case of the query “non-surgical lifting rome“, for which ad hoc created content is well positioned. Thanks to a link building and digital PR campaign, the doctor’s practice has been mentioned in more than 10 authoritative publications and blogs, while the content creation strategy implemented with the creation of an in-depth blog (which presents, for example, advice for patients) allows the site to intercept targeted traffic in an organic way, generating leads.

These are just some of the results obtained from articles created and optimised according to Workengo’s guidelines: 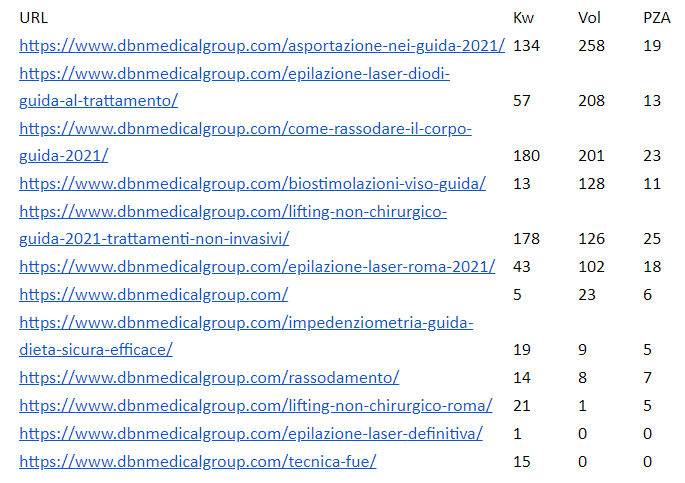 Thanks to the consultancy work supervised by Cutrufo, the practice has reaped a number of concrete results from the application of the strategy, namely:

The strategy used to relaunch the site

In concrete terms, the strategy for relaunching the site was quite extensive and involved several areas of optimisation and tools. As Marco Aurelio tells us, it was based in particular on:

When the new, fast and SEO-structured website was finally published, a blog section was opened for specific in-depth articles, which often reached the first page on Google. In addition, to boost the website and reach the first pages and top positions in the shortest possible time, a meticulous and structured digital PR and link building campaign was launched, which provided important results.

Ultimately, says Cutrufo, the monitoring, the writing of articles from an SEO perspective, the maintenance of the site and content, the selection of authoritative sources that linked to the website, but above all the initial strategy and study paid off, taking the site to a completely different level of quality and perception, both by users and by the search engine.