People Also Ask, a hidden gem to appear in SERP

We said this in recent weeks, presenting the results of our study on the composition of SERPs and the real decrease in space that the Google page reserves to organic links: more and more searches generate People also ask boxes, that in some categories exceeds 80 percent of attendance. This means moving the blue links but also, from the other point of view, a new opportunity of visibility for those who manage to place their content among these related questions: letâ€™s see together the tips and techniques to achieve this goal.

First identified in 2015, the People Also Ask (PAA) box became a familiar feature in the search results pages, so much so that it was also taken up by Bing.

According to some international studies, cited by this in-depth study of Search Engine Land, appears on average in 49 percent of all searches, about four times more frequently than featured snippets, which instead are displayed in just over 12 percent of SERPs.

The characteristics of the People Also Ask box

Usually placed in the middle of the page (after three organic results) or in a prominent position (just below position 1), and more rarely at the bottom of the page, the PAA box usually includes three or four questions related to the topic of the userâ€™s query. 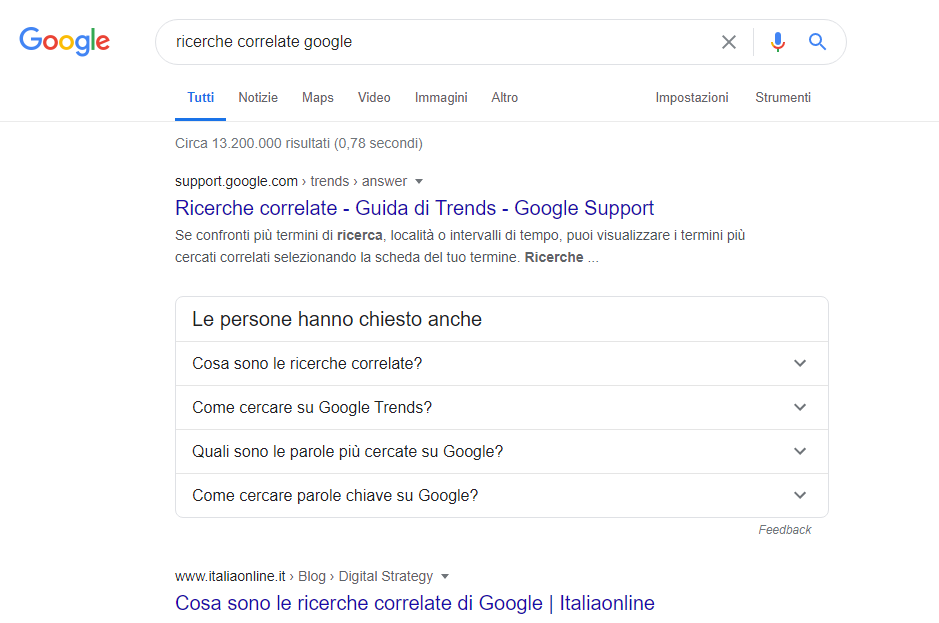 Google can bring out the PAA box for different types of search intents; when a user clicks on a question in the box, a short answer appears along with a link to the web page that hosts the content. Usually the answers are provided in textual form, but video tests were also noticed in the People also ask box. 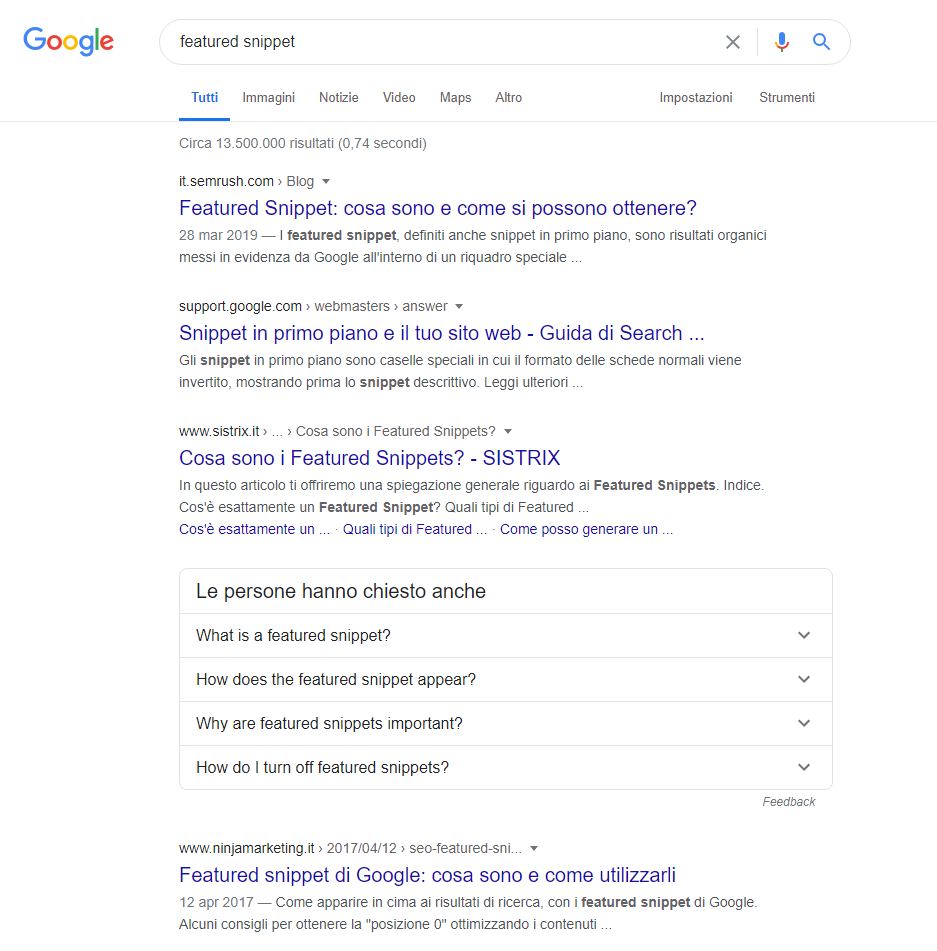 Moreover, in addition to revealing an answer, clicking on a question will dynamically generate other questions related to the one the user clicked on and there does not appear to be any limit to the number of times a user can click on a question and generate multiple PAA questions.

A hidden gem for SEO

For a site, the PAA box can become an additional opportunity to improve organic search performance or even simply to find new topic and keyword ideas for content creation and more.

A real hidden gem, as this other article on Search Engine Watch says, which reveals that only 13 percent of the sites that enter the box are placed among the top three in the classic ranking for the query, while 74% is not even present on the first page of the SERP!

This means that the PAA feature opens up traffic and visibility opportunities for sites that fail to increase their organic rankings in a traditional way, and that may instead have an opportunity to appear on the first page of search results.

Knowing the feature so to get visibility

In order to exploit this opportunity, however, we must first understand the intrinsic characteristics of the PAA and also know its (continuous) evolution: since its introduction, The box has been updated several times to provide users with more accurate answers and questions to answers they may not even have (yet) thought of.

For instance, since 2017 the Google PAA box has been dynamically loaded, increasing the number of questions shown to the user beyond the initial three or four, adding topics related to those on which the user clicked for the first time. This system allows users to alternatively explore search results by clicking on multiple questions to find the information they are looking for instead of clicking on traditional results and then browsing the page.

Moreover, continuing the interaction the box extends and moves the organic results more and more to the bottom of the page, in almost hidden positions.

Operations to make a content appear in the People also ask box should therefore start by trying to meet some of the key requirements that you can locate, the pattern of content factors behind the choice of sites to be shown by Google.

The criteria used to determine what content might be shown as a response in a PAA box are part of search engine algorithms, so we do not know exactly what it takes beyond the patterns that the SEO professionals have identified.

But some common traits – analyzing the feature in English for Google USA – was however highlighted, between elements of direct management of the site and others instead of being so to speak external, focused on the keyword that generates the box.

Usually PAA boxes are activated by longer keywords or complex search queries and there seems to be a clear correlation between the length of a query and a PAA; in particular, a 10-word query activates a PAA 72 percent of the time, while search results for a two-word query show a PAA only in 28 percent of cases.

Direct questions or question-like queries tend to produce SERP with a PAA box: queries starting with “what”, “why”, “when”, “where” and “who” activate a PAA in 86 percent of cases.

Internal factors, content characteristics that make it appear in PAA

Instead, there are three factors within the content identified by the analysis, because 79 percent of the PAA cells are filled with paragraphs taken from the contents of the site, followed by lists (13.8 percent) and tables (4.3 percent).

The average number of words within a paragraph presented in PAA is 41 words, so brevity is a valuable resource when creating content for a site.

When lists appear, they do not exceed 8 elements, while the minimum length is of only two elements.

A standard PAA box has space for 14 rows and three columns, although there are tables showing only one column and two rows. As they are less frequent, there is not enough data to give precise indications on this element.

How to optimize content to intercept a PAA box

In fact, the work of optimizing the content of a site for the box People have also asked is reduced to some key steps that should be basic in the editorial strategy; in particular, you must:

The SEO benefits of the People Also Ask box

Ultimately, the People also ask box can really become a key element to achieve greater results in terms of traffic, but also of brand awareness.

When users click on the questions, they are exposed to brands identified as “information providers” and can click on the answers to learn more, and then these brands have an opportunity for visibility in a crucial section of the results page.

Moreover, unlike featured snippets that were deduplicated earlier this year, it is possible that the same URL appears both as a traditional organic result on the first page of Google, both in the PAA box. The opposite is also possible, namely that web pages that do not rank on the first page of the SERP are included in the PAA box, and this means an opportunity for less powerful sites to get highly competitive spaces and visibility on the front page.

As said, then, discovering the PAA boxes and the questions/answers generated for your sector can become a method to improve the content strategy or review existing content: this is both to try to appear within the box, but also (and above all) to understand which one is the real search intent highlighted by the questions and what users might have thought when they typed in those particular search terms.

To find out and monitor the performance of any PAA listings you can use the Google Search Console, which however provides data on impressions and incoming clicks only when the PAA box is expanded to view your response. In addition, all links within a single PAA element have the same position in SERP according to the tool: that is, if the PAA box appears in position two, your answer card within the PAA box will be marked in GSC as position two, regardless of whether the response appeared as one of the originals or is the twentieth dynamically generated by the user.