May Google update, here are the first effects on sites and SERPs It has been years since last time we saw such volatility in Serps following an algorithmic update, at least according to the first (and obviously partial) analyses that can be done on the Google May 2020 Core Update, launched about a week ago and still in full development, as recalled by Mountain View. Letâ€™s try to understand what is happening to sites and Serps these days and to analyze the first effects of the spring update of the search engine. 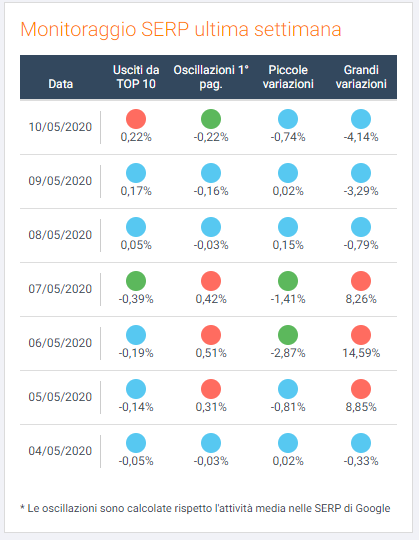 First effects of the Google May 2020 update

Launched in the british evening of last May 4, the update has immediately made us feel its reach with a remarkable debut (also compared to previous ones: here the analysis on the September 2019 core update and January 2020 core update) and three days of roller coaster. The SERP observatory of Seozoom recorded some very sensitive peaks on May 5, 6 and 7, especially for big variations, right before a new period of apparent calm and some other small aftershocks. 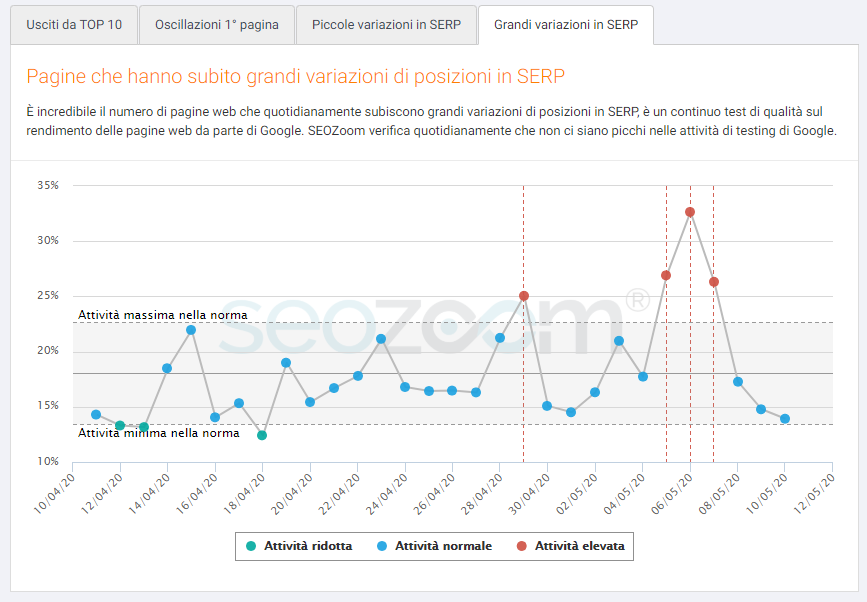 How SERPs are changing

The piece of data that catches the eye are the three peaks touched by the big variations in SERP, as mentioned: this SEOZoom parameter verifies the number of web pages that record the largest daily fluctuations in terms of ranking, both positive and negative, sign of a strong testing activity by the search engine algorithm.

In particular, on May 5 – the first full day of the new update – almost 27 percent of web pages has experienced these sudden ups and downs, while on the 6th the percentage has even gone up to 32 percent and on the 7th back to 27 percent. The trend seems to have apparently stopped, because in the following days the activity has returned to normal. 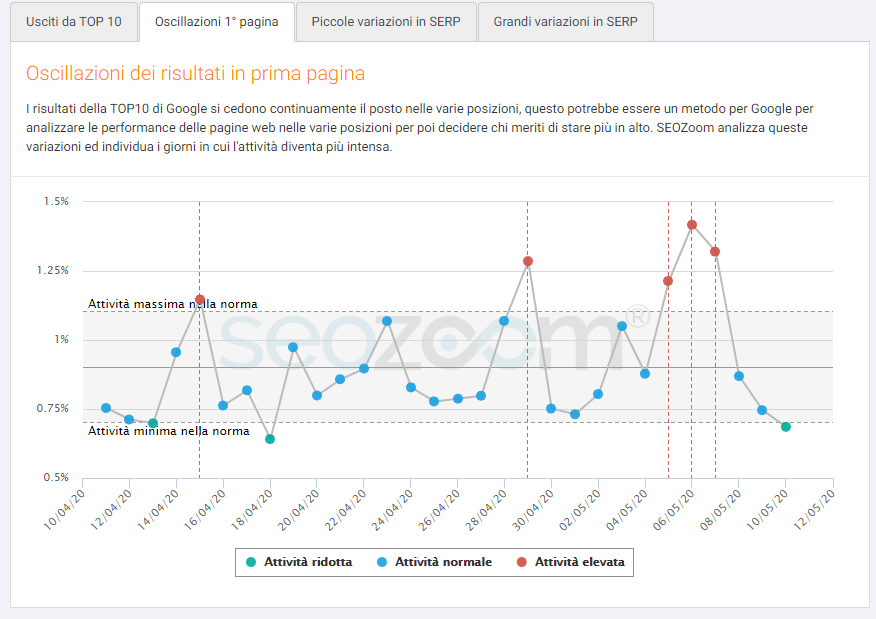 Lots of variations on first page

With SEOZoom we can also find out on which pages of the SERP these differences in ranking actually impacted: from May 6 to 8 it was the mythical first page of Google to have a high intensity of changes, much more frenetic than standards according to the data concerning the first page fluctuations of Seozoom. This means that the update is rewriting the Serps in their entirety and that Google is changing its mind on the sites to award with a placement in Top10, probably in the light of new answers more effective to the search intent of users. 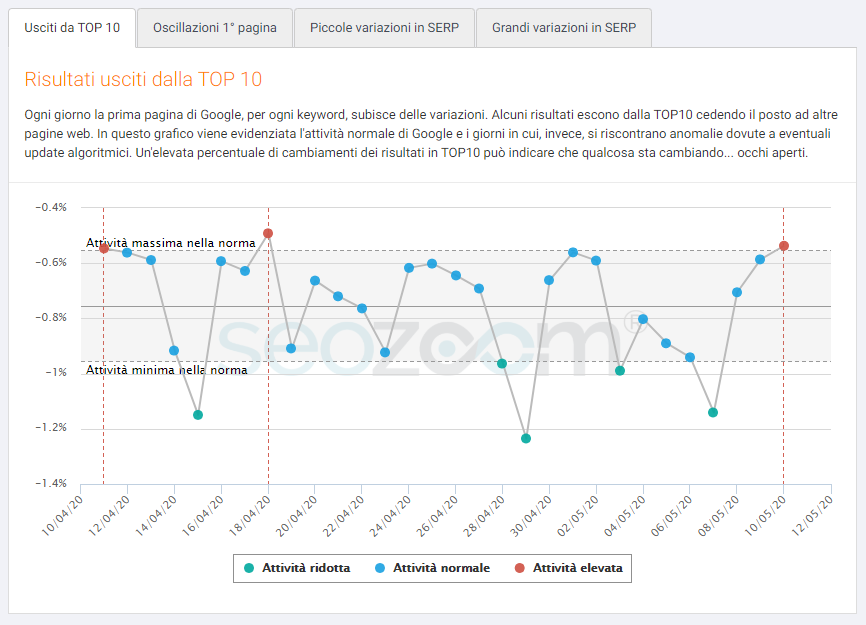 However, this mixing has at least initially covered only pages already placed in top10, as the dynamism of the oscillations of the first page does not correspond to a similar agitation in the results dropped from the top10 in the detections of our tool. Only from May 10 we start to notice the first movements: probably the update was first focused on reshuffling the rankings and now is discovering if there are new sites to be rewarded and others that no longer meet the quality requirements. 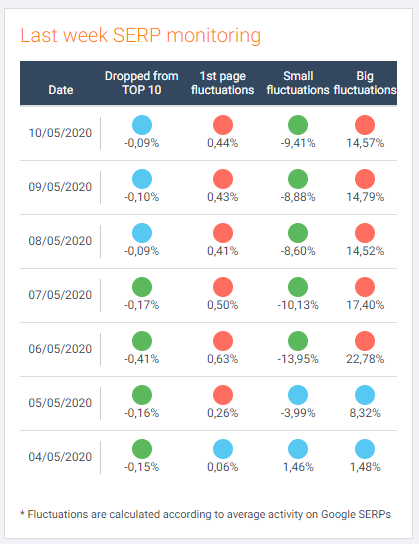 The analysis in the UK

This Italian observations also apply in a similar way to the British Serps monitored by Seozoom, although Google UK seems even more changeable: from May 6 onwards the data of big SERP fluctuations and 1st page fluctuations in these cases go hand in hand, and so there are numerous sites that have found themselves with a different position in the Top10 from one day to the next or that, with the same speed, have climbed the charts, but always within the first page. 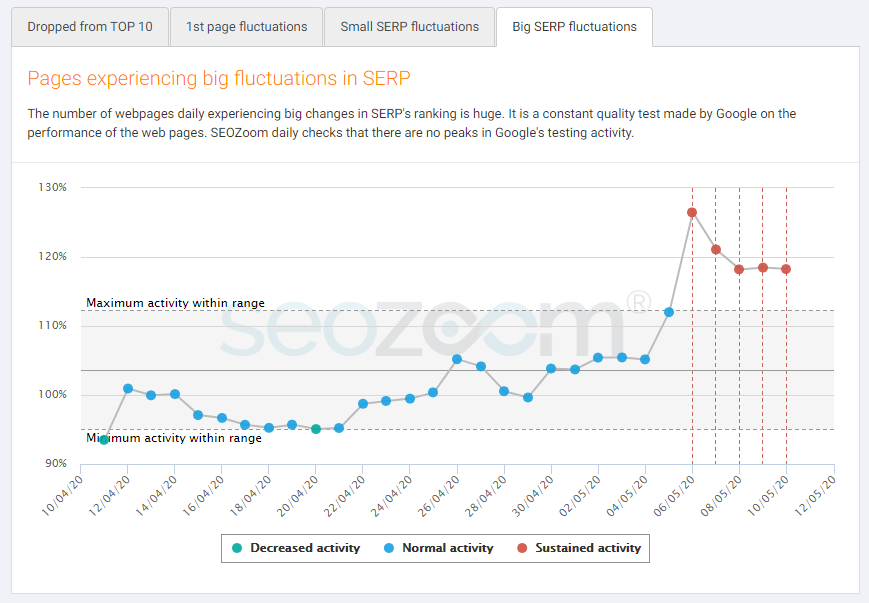 The day May 6 was the record so far for the first-page fluctuations on Google UK, with an activity 126 percent higher compared to the norm; for the SERP’s large variations, instead, it was the following March 7 to record the highest value of movements. 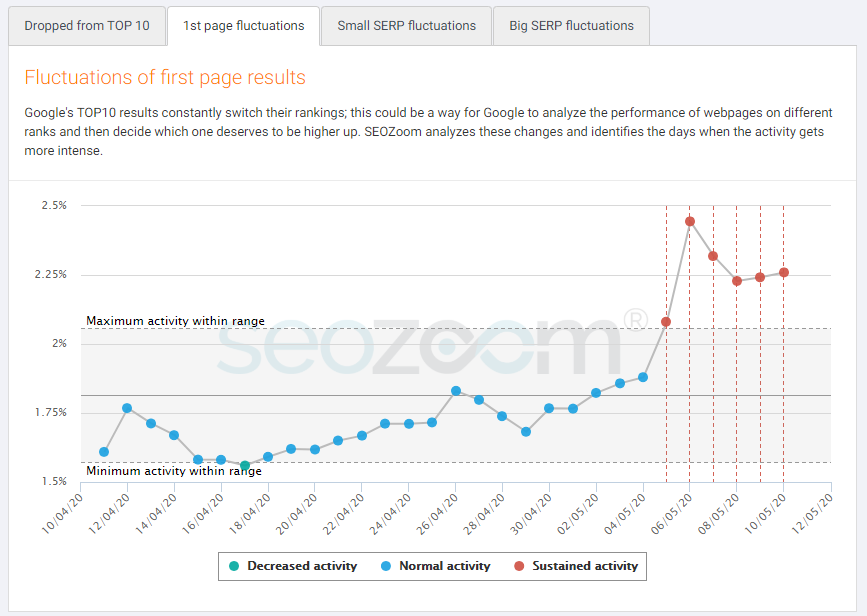 What these observations tell us

Still minding the partiality of these analyses (it takes another week to complete the action of the update, as anticipated by Danny Sullivan in the official announcement), it is however interesting to note what is happening to the Serps of Italy and United Kingdom in these early stages. In both cases, we have very sensitive effects on the scrambling of the positions on the front page, with many sites that are like crazy shards going upwards or downwards.

It is important to underline – as Google always does – that the update does not affect specific sectors or sites but it is an update – indeed – of some evaluation criteria of the search engine, which reassesses and verifies its rankings. So, there are no specific actions that you can take on sites or magical interventions to recover rankings and traffic, but there are still tips to follow for sites that dropped after a Google update.

Do not confuse core update effects and the Coronavirus impact

In this specific context, then, there is another evaluation error to avoid: confusing the impact of the update with the effects of the Coronavirus and connect the loss of positions to the historical moment. As we analyzed through our new Covid-19 Impact tool, organic research has been strongly affected and influenced by lockdown and all the upheavals to our lives, but only (or mostly) in quantitative terms: sectors that previously had very high research volumes have become less interesting, and others that were little sought after have become trending.

This general upheaval, however, did not concern the ranking positions, at least in most cases, because the original search intent has not changed. Different instead is the current situation compared to the core update, which affects precisely the positions and the way in which – according to Google – our pages are useful and of quality for the needs of people.

The update analysis on international SERPs

The US experts offer us some further reflection on the effects of Google’s May 2020 core update. In particular, Roger Montti on Searchenginejournal has studied what are the recurring elements that he has noticed since May 4, and that is the strong interest for health and business sites with local activities (areas where Google is usually very attentive to), the contemporary launch worldwide and in multiple languages and markets (while previously the effects in some areas were delayed).

Based on his experience, Montti says that the extreme volatility observed so far may depend on two factors:

This phase will then be followed by the correction of false positives, namely the review work that Google engineers will do by analyzing user feedbacks and their behavior with respect to new results, necessary to optimize in a more definitively way the rankings and, possibly, move up the sites that really deserve it and bring down unfairly rewarded sites.