Google's features and clicks, a new study on the zero clicks trend Written by: admin
The zero clicks trend in SERP was one of the biggest issues last year, but it is above all a reality to reckon so to understand the performance of our site and outline the most efficient strategies to intercept traffic. A recent study by Perficient Digital on 250 million SERPs reveals that snippets are “neutral clicks” and that ads steal traffic from the SERPs without a single click.

The study on the impact of the features in SERP

Reporting these data is an article by Search Engine Land (from which the following images are taken), which also summarizes the main results of this study: SERPs without clicks are a much less important factor when queries (commercial, most of the times) activate the appearance of ads, there are significant differences in the CTR of position 1 for branded and unmarked queries, and lastly featured snippets affect relatively the CTR in the aggregate.

The research was conducted by Perficient Digital together with its partner AuthorityLabs analyzing about 250 million searches so to understand the impact of Googleâ€™s SERP features on organic click percentages. In particular, for 30 days were examined the main features that appear in Google result pages – ads, snippets, carousels, “people also ask” boxes, sitelinks etc. – and clickstream data to assess their impact on the organic CTR.

The numbers of no-clicks searches

All in all, the study found a percentage of no-clicks queries of about 44 percent on average from desktops and mobile devices; to be precise, 33.5 percent from desktops and 54.6 percent from mobile browsing. Data contrasting with the findings of Jumpshot-SparkToro highlighted by Rand fishkin, which report a share of more than 50 percent searches without clicking on results.

One of the most interesting factors concerns the relationship between clicks and ads: when in commercial queries there are advertisements, the percentage of clickable results decreases significantly on the desktop, falling below 14 percent. It is the ads themselves to gain clicks in this context, going up to 31 percent, while organic clicks remain at 55 percent. On the contrary, in SERPs without Ads user clicks are distributed in the opposite way: the organic is even more predominant (61 percent), no clicks are 36 percent and ads stop at around 3 percent.

CTR in queries branded and not branded, the differences

According to the study, the percentage of CTR for branded or navigational queries is very different (and higher) than non-branded queries: for position 1, for instance, the organic CTR in the presence of brands is almost 70 percent, but when the brand is not present the rate drops around 20 percent. This discovery leads Perficient Digital to claim that “past traditional CTR models are largely meaningless because they do not separate user behavior in branded queries from unbranded queries”. 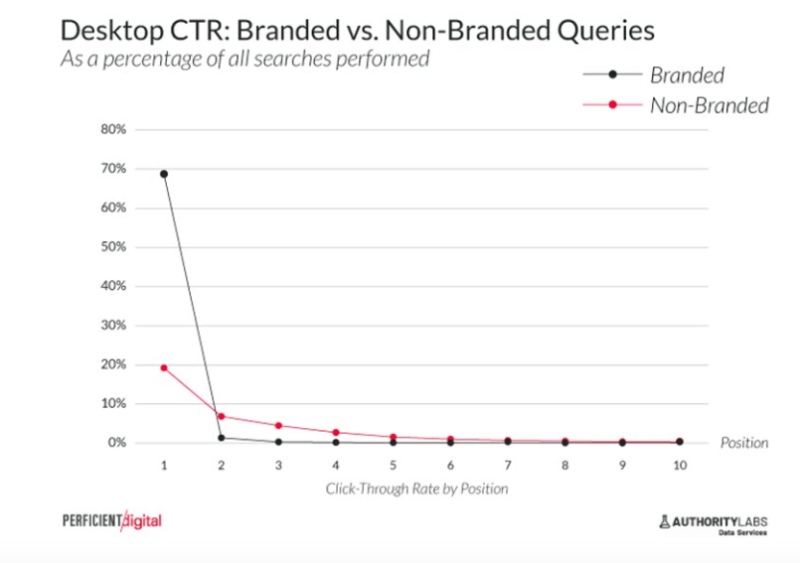 Featured snippets do not impact on clicks

Another interesting analysis that comes from the study concerns featured snippets that, a little by surprise, are called “neutral on the click“: Traditionally, these fragments are thought to help generate searches without clickings since they give people enough information without clicking on a site.

But Perficient Digital found that, although not significantly, the “CTR of queries with featured snippets is slightly higher than where they are absent”. In some cases, the snippet answered the question without there being a click to a site, but in others pushed “the CTR substantially higher than the sites from which the snippet was taken”. Therefore, overall, the study concludes that featured snippets have a negligible impact on CTR.

How to apply these info inside our SEO strategy

There are two main elements this study gives us that we can use in our strategies: the first aspect is the value of SERP features, such as carousels, snippets and local packs, to intercept the interests and clicks of users. This confirms the importance of optimizing the site and contents to intercept these features and exploit their advantages.

As SEO-oriented advice, then, the analysis reaffirms that working on long tails is a strategy that can lead to success, because long-tailed queries “still represent 70 percent or more of all searches and Google is not able to provide answers without clicking on all these queries”.