What kind of January was to Google and its Research system? Re-reading our blog’s last weeks articles we already can perceive a quite intense month, with a speed up in the operations obviously generated by the launch of the core update. Piecing back together in detail Big G’s work and news is the latest episode of Google Search News on Youtube, with John Mueller recounting what actually happened over the month.

The series, specifically conceived to update webmasters, editors and SEO specialists on Google’s ecosystem, is at its third episode (right after its first Google newscast in September and November’s recap video), and has a pretty dense index, so much that Mueller himself jokes about it saying “it’s been a busy time!“. And indeed it was, given the fact that among covered topics we can find: 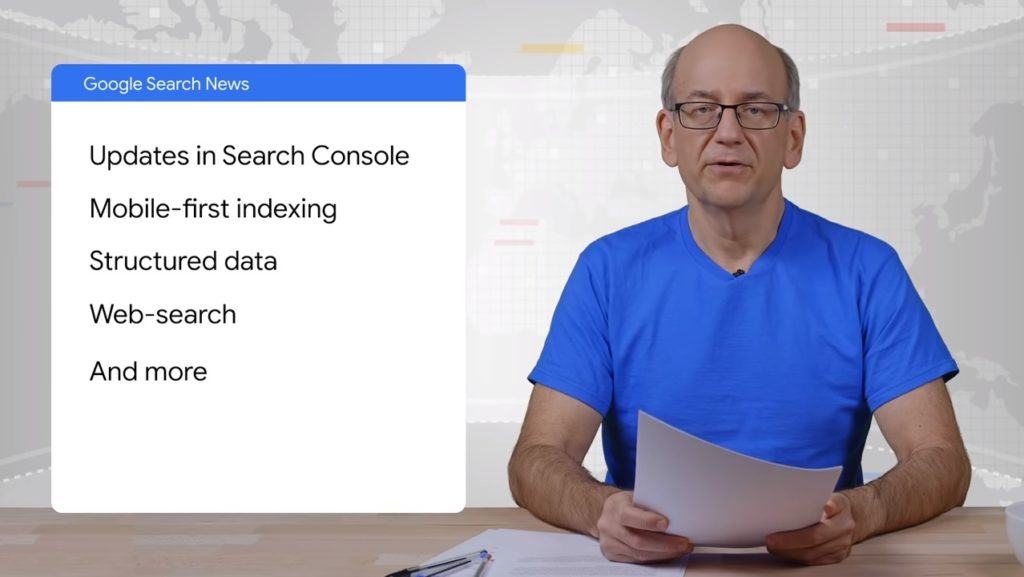 Updates to the Google Search Console

This month “we celebrated the two-year anniversary of the new Search Console”: to create “new features to replace the old ones has been a long process, and it was awesome to receive so many feedbacks from users”, says Big G’s Senior Webmaster Trends Analyst.

Recently, the team taking care of the suite worked in order to make fresher the data showed inside Discover Report (similarly to what happened for the performance report) and to make even more comprehensive the report on Coverage. Moreover, there have also been some interventions on the system of communication to users, that can now find the messages directly into the Report section they refer to, so to make easier to identify and fix the reported issues.

A new documentation for mobile-first indexing

Mobile first-indexing keeps on growing. The process of scanning and indexing with mobile devices to keep in line with what the most part of users see whenever navigating the Web,  that from the 1st of July 2019 has become the number one system used by Googlebot, in the past few months allowed the bot to interpret a lot of old sites this way and hence recognize a higher number of problems that webmasters should fix.

The medium-long term goal of Google is to complete sites mapping through smartphone agent, so to keep up with what the most part of web users actually see. With its mobile firts index Google only indexes the contents in the mobile version of sites’ pages, not limited to the text, but to images, headings, links and structured data as well. Mueller also lists some quick tips to keep in mind:

Speaking of structured data, Mueller reminds us that Google uses different formats of these markings to better understand the content of web pages: over the last few weeks, the company decided not to support data-vocabulary.org anymore (mainly used for breadcrumbs) starting from the 6th of April 2020, now completely relying on schema.org.

“Every year we make thousands of updates in Google Search”, says Mueller, that are needed to guarantee the users the discovery of “useful and relevant” information; even in the latest period of activity this area has been pretty lively, with interventions such as:

Among the latest news, the YouTube video also reports a modification on Chrome, that becomes even stricter toward those sites using the HTTPS protocol wrong and thus owning mixed contents. Meaning pages secured with the Https padlock but still owning unsafe resources, such as images or Javascript items: “Mixed content is bad”, remarks Mueller, and makes pages unsecure.

A news on the rendering activity, too: as already anticipated in the past months, Google is adopting a more modern version of Chrome for this operation and a part of this change is still in progress. To be specific, Googlebot will have a user agent similar to the one users of the Google’s browser regularly use and also its name/version will change (therefore, sites currently identifying the passage of the bot by using it specific name will have to update the specifics).