A format that better highlights the brand, emphasized and put at the center, that helps people to better and quicker figure out the sources of the info they are about to click on, that makes easier the comparative scan of different results and, consequently, to decide which site to explore. These are the goals that Google means to reach with its new Research layout from desktop, which testing phase officially ended a few days ago.

The official Twitter account @searchliaision reported the news, also recounting (briefly, obviously) the reasonings that led the action of the californian company’s developers: it all began last year, with the new look given to the Google’s search results from mobile navigation, and with the following design interventions on the search engine viewed by desktop devices.

Already back in October, in fact, we glimpsed some of Google’s experiments for the Search’s design from desktop, but the tests took a long time to be completed; still in the past few weeks, most part of search sessions resulted in the “old version” default screen, and only on few cases the modified look appeared, so much that it was not that clear which final way the company was meant to take.

Goodbye to the green URLs

Now we instead have the certainty of the change and we just need to accustom to the new design, toward which a few first controversies are starting to gravitate, as there is who talks about “a step back in time” (for a style that is claimed to remind the one used back in the ’90s!) and who rather complains about the disappearing of clickable URLs on the SERP. 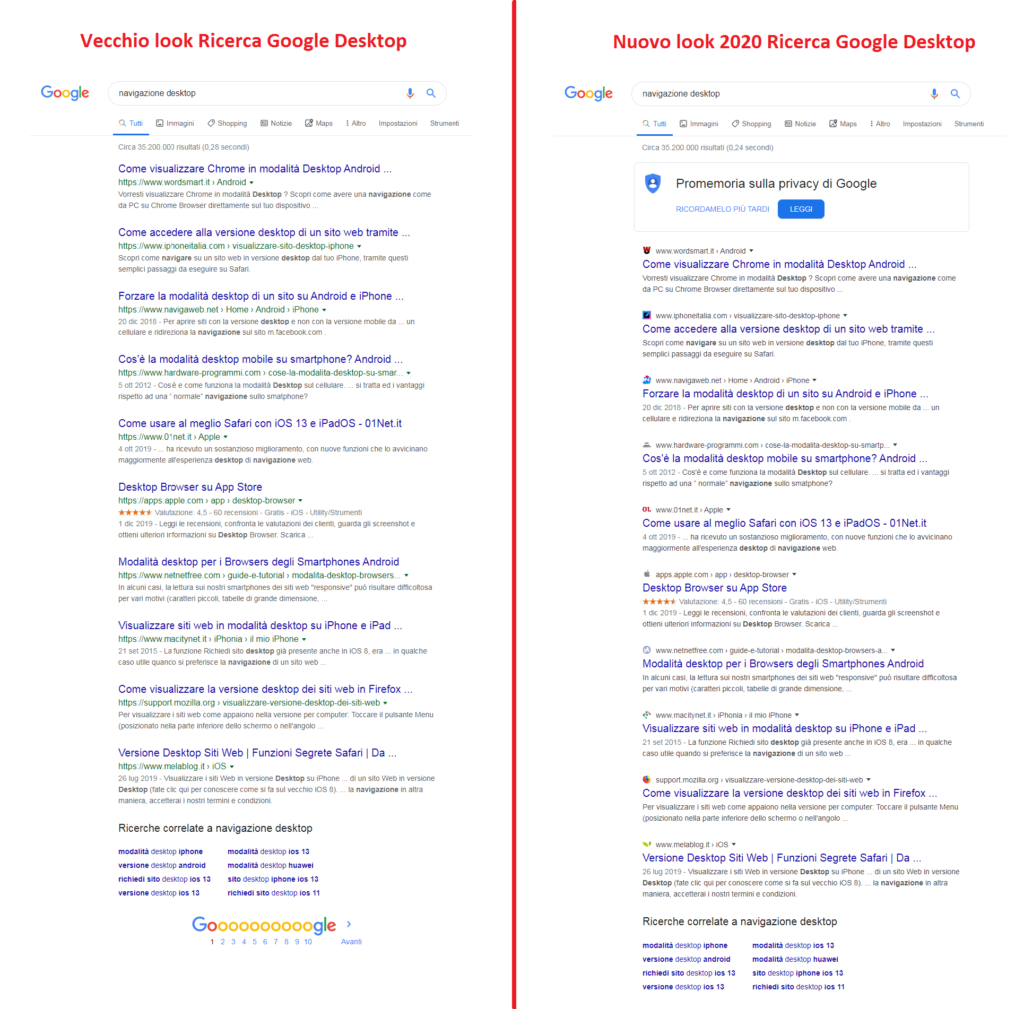 The most blatant news is this very one, picked up from what already tried for mobile devices: the green breadcrumb reporting as a whole the ranked site’s URL disappears, while there are seemingly no changes to SEO titles and meta descriptions, both in the characters’ form and size.

A Brand more relevant with the favicon

Alongside the title, moreover, now appears the site’s favicon, another element that strongly characterize the result, as well as other factor to assess in a brand awareness strategy, as we were already saying a few times ago. In order to set up and define the thumbnail image of the site, Google created a guide offering the main indications to follow and parameters to comply with (also mentioned by official tweets).

Changes in the view of SERP ads

A lot more substantial are the modifications concerning the Google ADS department: now all of the ads here on Google Italy’s SERPs are highlighted with a label marking the word “Advertisement” written in black and bold, instead of the previous green box introduced back in 2017. The URL changes its color and placement as well, now moving from green to black and on the top part of the ad, right before title.

Is it more confusing to users?

The risk, according to the most critical observers, is that saying goodbye to the green could generate more confusion in beginner users about the distinction between organic results and payed links (an already sore spot to many, as we have seen before) and, indeed, despite the full-featured word advertisement right on top, it is not that easy to spot ADS results and classical ranking with a single glance (but maybe neither it was before).

SEO evaluations on the effects of the new design

Google Research’s new desktop look will become default over coming weeks, based on what it is possible to see now, and in the meantime we will have plenty of time to accustom our eyes to these changes. It should not be that hard, given the fact that the stayle mimics the one we all are already using with our smartphones, but anyway it is always good not to do immediate evaluations concerning possible traffic drops or click-through rate variations from SERPs: better allow some time to users to get used to the news, understand how people reacts to the interactions with favicons e brands and only later actually intervene to fix possible errors or issues.