It looked like a lazy start of the year for Big G: the official Webmasters blog was not been updated since the summary post on the 2019 activity, and its public voices were working as usual without big announcements or surprises. Basically, everything was quite normal. And then, all of a sudden, at 8.01 pm (back in California) of the 13th of January, here it came the tweet that rocked the boat: a new global update of the algorithm is going to start off, the January 2020 Core Update. 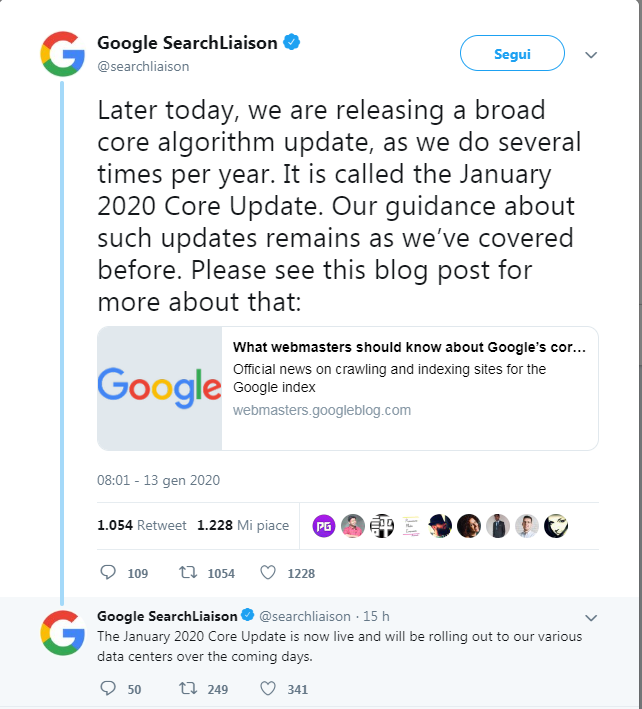 About an hour later, a second tweet informed us of the official launch of the new algorithm, that “will be rolling out to our various data centers over the coming days”, says @searchliaison. As already happened on previous updates, Google also offers some immediate suggestions in order to promptly react to the news, that can actually be summarized as “don’t do anything in particular”.

How to react to Google’s update

To be more precise, the account managed by Danny Sullivan refers to the guide to properly respond to Google’s updates, that is a gathering of suggestions and best practices that every site wanting to compete on the search engine and do SEO should always apply and keep in mind. The message stressed over and over is that there is not any fix, any correction, given the fact that the possible drops following an update are not really tied to specific problems of the pages, because this is simply not how updates work.

Google updates are technical intervention performed multiple times over the year so to perfect some aspects of the Research: they do not hit specific sites or sectors, but rather broadly affect everything and anyone, aiming to enhance the way Google’s systems use to assess contents. Therefore, pages that lose eanking right after a broad core update are not “wrong” or currently penalized, but merely deemed less important and relevant to the specific query compared to the contents offered by other competitors, previously overlooked.

Analysis of the update on the SERP with SEOZoom

It is obviously too early to see the actual effects of the January 2020 Core Update, but the analysis of SEOZoom’s SERP Observatory still allows us to notice some interesting aspects. For instance, on Google Italy the activity already suffered some bounces in the past few days, especially with those the software identifies as “small ranking variations“.

A lot more hectic was the situation on the SERPs of Google UK, where the fluctuations have been particularly volatile all week long. In this case too, the disruptions more closely concerned the “small variations“, with ranking variations on SERP a lot higher than the normal average.

These kind of fluctuations already attracted the attention of all internationals observers, and in particular on Seroundtable they already talked about a possible “7 January update” of Google, reporting all of the various threads opened on the WebmasterWorld and Black Hat World forums. Impossible to determine if these fluctuatons were some kind of preventive test before the official release of the broad core update or just a simple effect of the normal running-in activity of the Mountain View’s algorithm.

There is then a further funny consideration to do: as already noticed on previous occasions, the January 2020 core update as well closely follows the update of quality raters guidelines. Not wanting to go more back in time than 2019, it happened both in Spring (with guidelines updated on the 16th May, and the algorithmic update on the 3rd June) and in Autumn (quality raters document modified on the 5th September, update of search algorithm landed on the 25th September), so it cannot really miss Winter now!

Here too, we do not have any real certainty on how Google schedules its work, but it is as if it uses to periodically perform a peculiar work on SERPs, that on one hand leads to the correction of all papers concerning human (and external) evaluation, and on the other to the apply of enhancing modifications on the SERP.

Anyway, sure thing is that there is a new update now launching: over coming days we will be able to verify its magnitude and will try and draw some indications from the areas it affected.