News platforms have a new BFF: it is Google Discover, the mobile feed launched in the past few months by Mountain View’s company that is becoming a true fundamental channel to lead traffic and readers on our own pages! But, as always, we need to pay attention not to revolve our whole business around a single resource, as visits fluctuations still are very intense and different from one other.

The warning comes from Gary Illyes, Google’s Webmaster Trends Analyst, that answering a comment tweet on the latest Google Discover data more or less says: “I hope that people understand that the traffic sourcing from Discover could disappear on any given moment and for that they do not build their entire business model on it”. 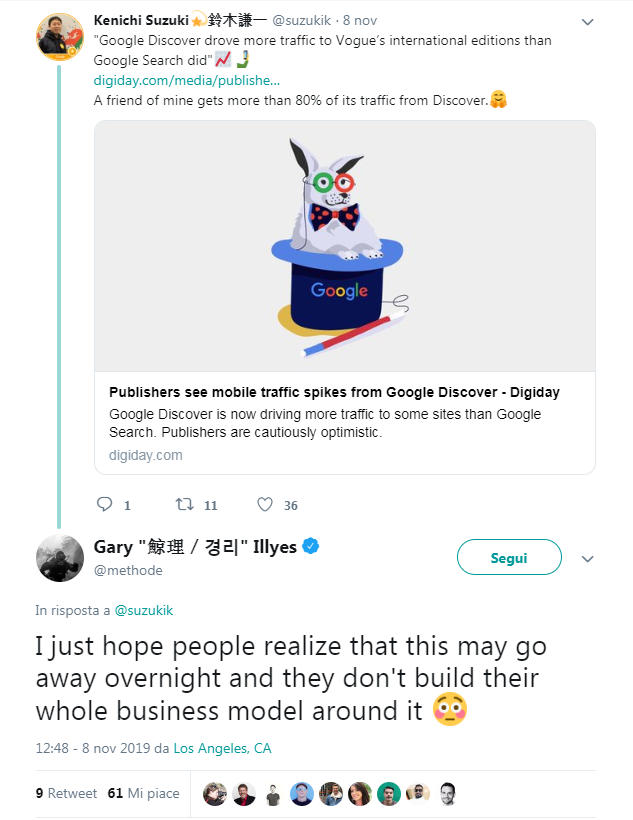 And this consideration could be made by anyone ever had the pleasure to appear inside mobile Google’s feed, experiencing a peak of traffic and readers that inevitably dropped once the news “disappeared” from Discover.

A practical example comes from the United States and an international editorial group like CondĂ© Nast: as two influential company sources recounted at the Digiday , last October Google Discover brought far more traffic toward Vogue’s international editions that Google Search did! The trend has been more prominent in India eand Mexico, where Discover represented more than 3/4 of the entire traffic those sites obtained from Google’s properties, but Vogue Paris in France as well profitted from this new channel, while the american sites of the group saw an increase of the 20% of the traffic sourcing from Discover itself.

The traffic sourcing from Discover still is erratic

The perception changes from editor to editor, though; the article reported other claims too, such as the one from a Vice’s spokesperson that defines Discover as a “precious and constant referral source, a place where to find a bigger audience”. On the other hand, an american publisher owning a “search-focused” site says that “Google Discover really is intriguing, but the traffic redirected from the channel is still erratic”, the actual reason why “nobody is truly counting on it yet”. 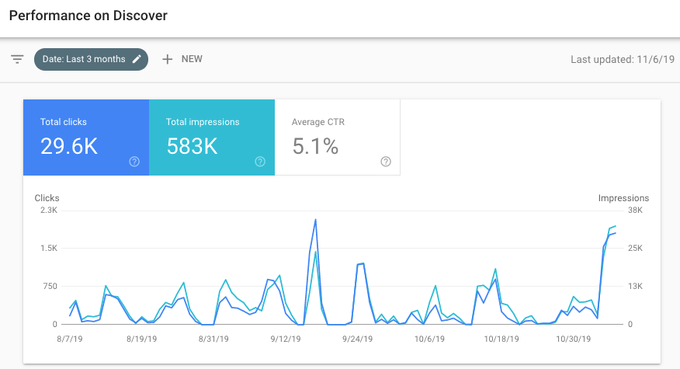 A fourth voice reported from Digiday better explains this perception: if the profits gained from Google Discover really are promising, they also are hard to predict, even because they were not able to “detect different behaviours among those visitors that were profitting through Google Discover”. Anyway, the feed seems to still offer interesting outlooks given the fact that succeeds in bringing to the sites “a fairly loyal audience and genuine chances of monetization“.

For sure, though, Discover is a clue of the way Google is acting more and more as news gatherer or a true and proper editorial portal ( one of the reasons behind frictions with news editors in France for Google News France), that still provides interesting profits to the sites: according to an analysis carried out by Parse.ly also quoted in the same article, the 27% of site’s visitors landed on it through this channel tends to come back and that is the highest percentage compared to any other social media channel.

How does the Discover feed work

Despite the unpredictable nature of traffic, though, editors seem to be genuinely impressed by Discover and its ability to create a sense of familiarity and routine among readers. As we know, each user’s Discovery feed is customized according to the previously searched content or content read on other Google’s products, but the critical note is that it is still not possible to actually study which type of websites Google places on Discover.

For instance, not every proposed site is indexed on Google News nor have particularly brilliant rankings, and the only sure thing is that the news are sorted based on the profiling and timeline of the researches made by Google’s ecosystem tools, but besides that there are no crystal clear dynamics on filters and used criteria yet.

SEO suggestions to try and appear on Google’s feed

Therefore, our advice is to always strive to enhance contents from a SEO copywriting perspective, take care of both pictures and multimedial contents to assist research by images and always keep track of the trending news to try and conquer a feed placement, as we were saying on our service manual.