December 2020 Google Core Update, effects and analyses of the update This time, as well, it took about two weeks for the rollout of the Google update: Wednesday, December 16, at 13.42 ET, came the tweet with which @searchliaison informed the community that the December 2020 Core Update was fully deployed, thus closing the phase of fluctuations that marked the last days.

The effects of the December 2020 Google update

Looking at the data of the SEOZoom SERP Observatory, we can see that in Italy the most relevant effects of the update were felt between December 4 and 10: in these days, in fact, the activity of the fluctuations of the results on the front page has been higher than the norm (1.76% peak, reached just on December 4), but also the ones of small (45.9% on December 7) and large variations (38.8%, also on December 4, the first day of actual release) in SERP. 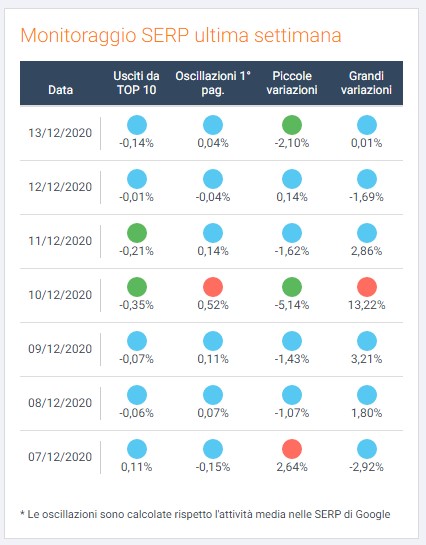 Sign of a core update that caused some shock to the results, both on the first page (where, apparently, it has mixed the positions among the top10 rather than completely upset the SERP, at least compared to the average activity trends) that in the following ones, and a phase of “quality testing” by Google that really continued for several days, before settling. 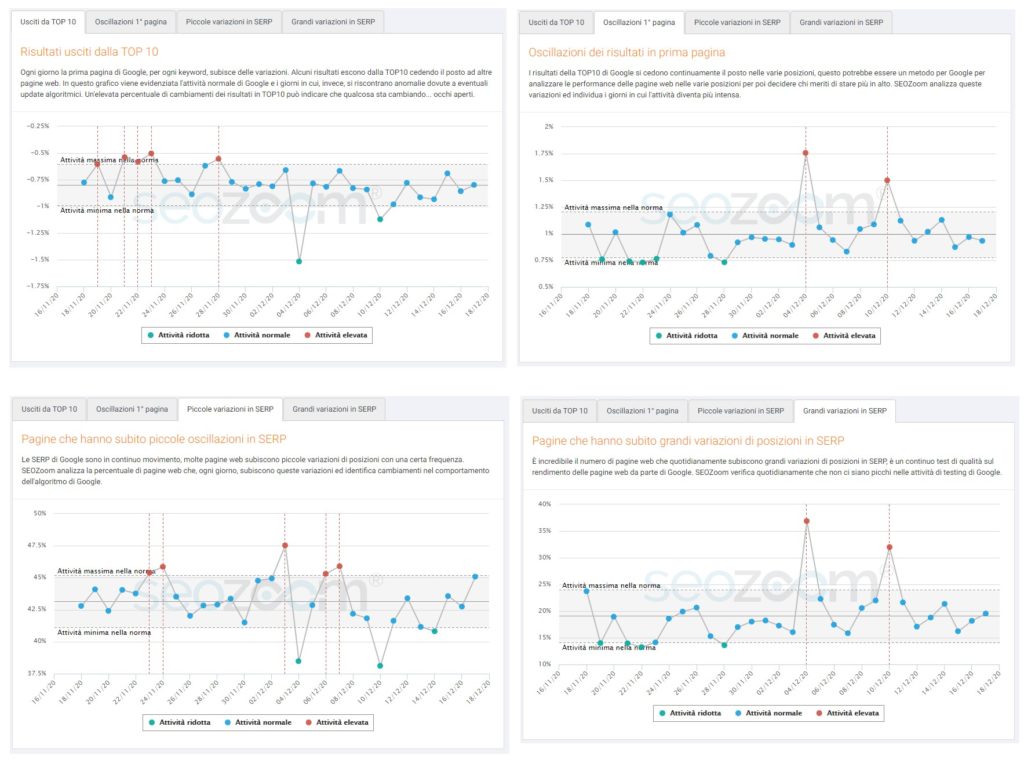 The situation on Google UK and Google ES

Our platform also allows us to take a look at the effects of the December 2020 Core Update on the search results of Google UK and Google ES (a constantly developing database). 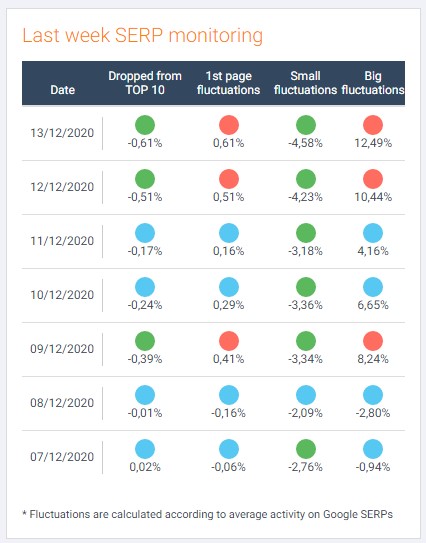 For the United Kingdom, there are two pieces of data that catch the eye, namely the values of the “Fluctuations of the results on the front page” and the “Pages that have undergone large ranking changes in SERP”, which have had similar trends. In particular, a first peak of considerable activity around December 6/7 and then, after a brief moment of calm, a sort of “second wave” between the 12th and 17th of the month. 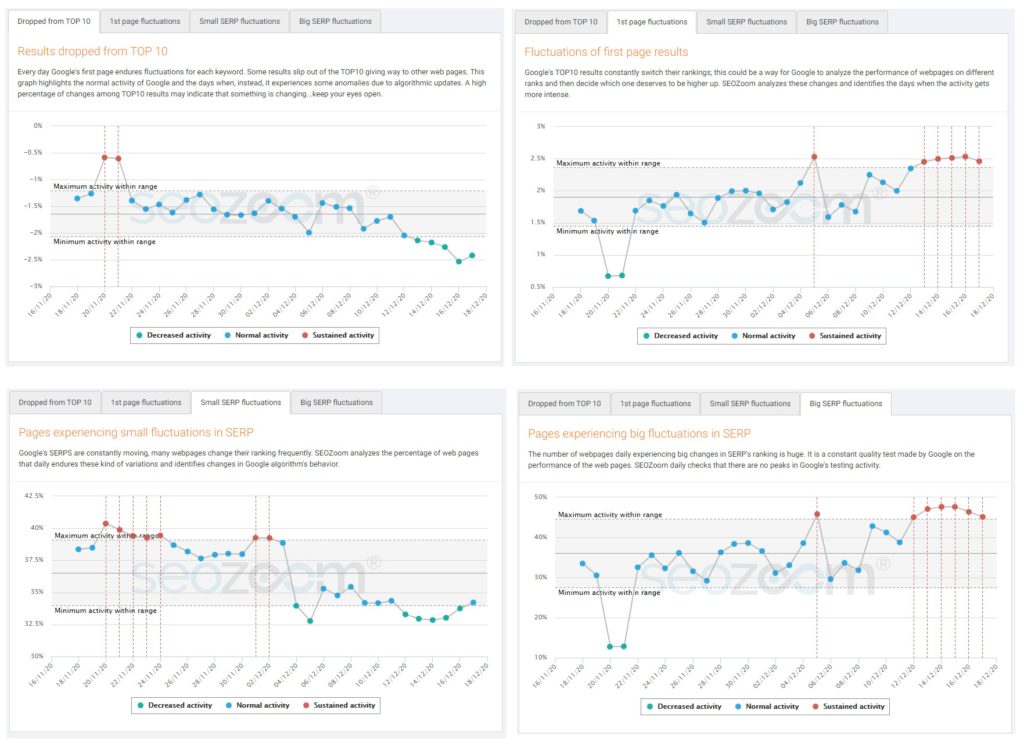 In the first case, these are internal movements between pages that are already on the front page (one of the methods by which Google analyzes the performance of pages and then decide who deserves to stay higher), while the big variations trace the testing work of the search engine on the performance of classified pages (which often “shows” in these rankings distortions). 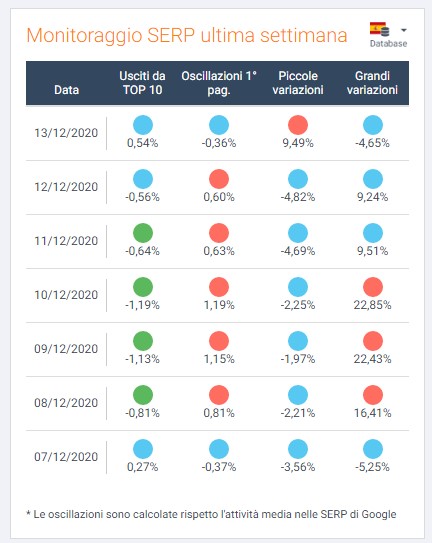 Much more jagged the panorama of effects on Google Spain, affecting all the values taken into account by our software: there were therefore large and small variations, but also oscillations in Top10 and – a unique case among those analyzed – a greater frequency of results dropped from the first page and therefore really affected by the update sites, which find themselves undermined by competitors. 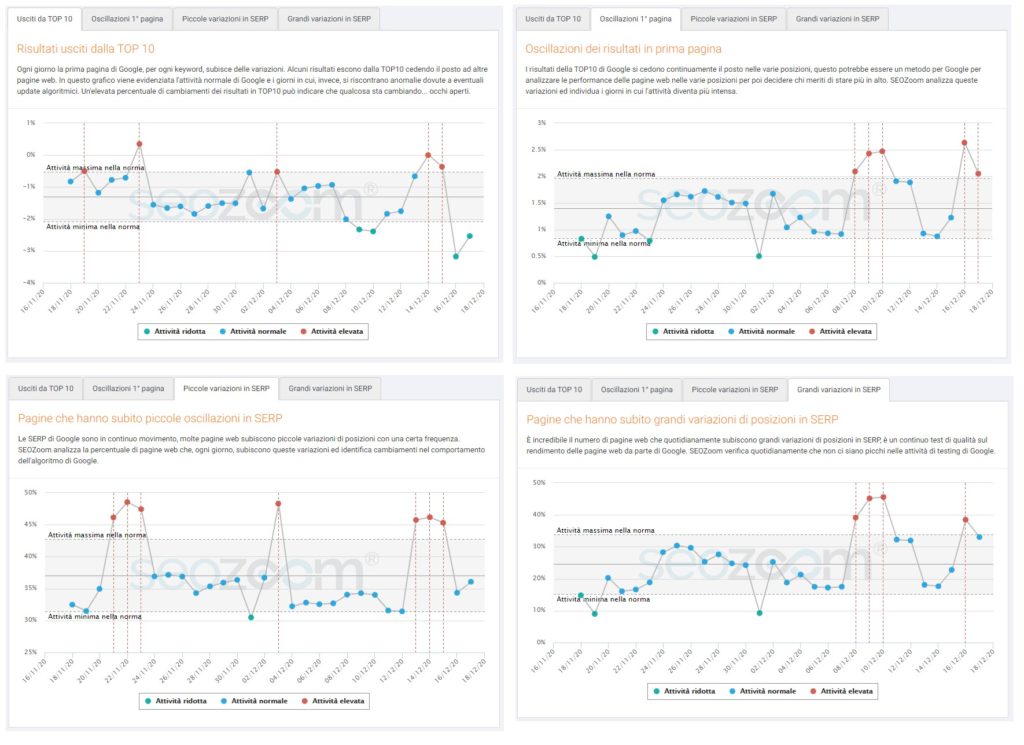 Assessing the impact of this core update

Many international analysts have tried to find the common lines of this update, and in particular Lily Ray has written an in-depth report on who has won and lost positions and visibility.

From her study, it emerges that the categories that have had the largest increases (over 10%) after the December 2020 core update are Finance, Accounting and Taxes, LGBTQ, Nutrition and Fitness, Grocery Stores, Film and Streaming. On the other hand, issues such as Natural and Alternative Medicines, Addictions, Care of the Elderly, Dating, Sport, Performing Arts and News and Media lose their visibility.

On a domains level, numerous newspapers and magazines seem to lose, to which Google prefers vertical sites on individual topics, as well as are in decline some sites that published content “remodulated” from Wikipedia or other authoritative online sources (which could be a sign of the algorithmâ€™s new focus on exclusive and original content).

Also, do not forget a key fact: if the site loses traffic after an update also depends on its no longer being relevant with the trends of interest and the search intent of users.

The most striking aspect of this update is the sharp reversal in visibility of some of the sites that had been the big winners of the May 2020 Core Update, such as Amazon, Pinterest, CNN and New York Times, who lost some of their ranking to the benefit of their competitors, even smaller in size. 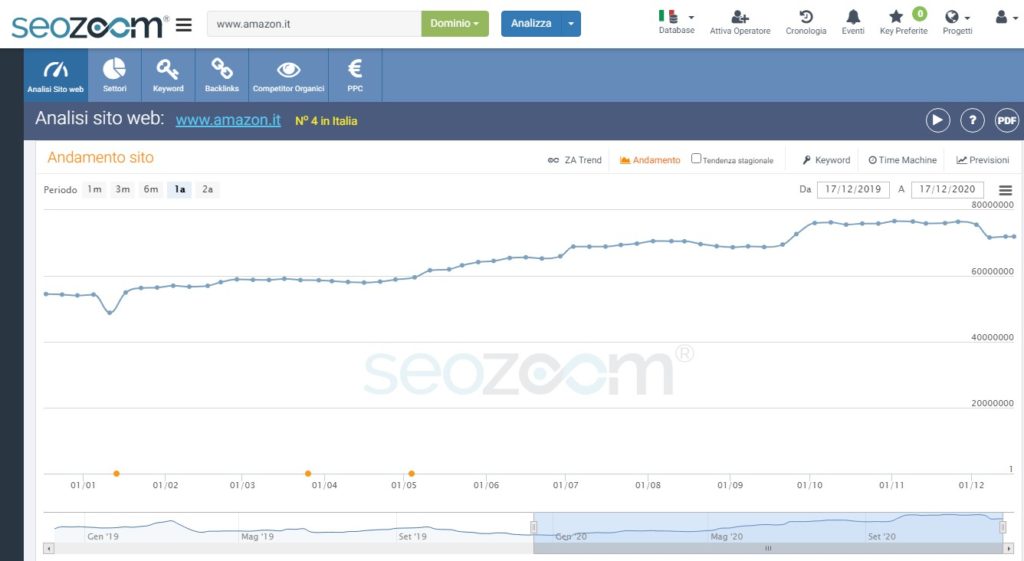 This situation is also evident in our country of origin, as shown by the graph for the Italian version of Amazon, which between December 3 and 8 lost almost 4 million estimated traffic and one point of Zoom Authority (down to 94). The traffic of Gazzetta.it and Corriere.it (almost 2 million lost and one less point of ZA) also is in decline, as well as the one from of HdBlog (one of the top players in the technology sector).

On the contrary, among the sites that have gained rankings and visibility there internationally are many who have worked hard to improve their values of EAT, so according to Lily Ray they are starting to see the first signs of recovery, but also all the major social like facebook.com, linkedin.com, youtube.com, twitter.com, instagram.com, up to vertical like imdb.com and rottentomatoes.com.

In Italy, however, to conquer traffic after the update are, among others, the sites of Aranzulla, Zalando, Sky Sport and Subito.it, as proof of the extension of the categories in which the update has made its impact felt.

How a core update works

In recent weeks, Google has then provided some more details on the general operation of core updates and also about this last one in December.

In particular, Danny Sullivan explained that a “core update is essential for all the contents of the Google Index“, is therefore directed to the entire index, page by page. This explains, therefore, why generally its effects are not seen on a single page level, but rather on a domain level, and therefore a site that has many pages of “insufficient” quality or not perfectly in focus risks losing positions after the updates.

It was instead John Mueller to turn off some speculations on the December 2020 core update, denying a correlation with the so-called Passage Indexing (ie, the indexing of individual passages of a content, anticipated in the latest Search On event). In fact, the Googler says he is not sure whether index passaging is already active or not, but that still excludes that Google could have planned its release in conjunction with the launch of a major update.